Home » APPS » Why I Won’t Be Investing in Snapchat

If you have been paying attention to Snapchat’s recent IPO Snap Inc. (NYSE:SNAP) you should have concluded that it is an extremely risky bet.

Unlike the significant pool of millennials that piled into the stock only to realise they had purchased shares in Snap Interactive an entirely different company!

Hilarity aside, step one: always read the IPO (initial public offering link here) followed by step two: identify what you are getting yourself into before buying shares in a disappearing photo app company.

What Are You Buying Into?

Never invest in a business you can’t understand – Buffett-isms

So what exactly are you investing in? According to the offering it’s a camera company. Which is a poor start to begin with. If you completed your due diligence you would have read on page 16 and page 36 that you have no voting rights:

“Our two co-founders have control over all stockholder decisions because they control a substantial majority of our voting stock.” – PAGE 16

“We are not aware of any other company that has completed an initial public offering of non-voting stock on a U.S. stock exchange. We therefore cannot predict the impact our capital structure and the concentrated control by our founders may have on our stock price or our business.” PAGE 36

Unlike almost every other public offering, the two co-founders control “all stockholder decisions”. This leaves Snap with an unconventional structure that gives shareholders virtually no power. The company you invest in today may become an entirely different business based on the whims of its two founders. You should see troubling signs as to what this signals.

Anyone with even a cursory knowledge of how tech IPO’s work should be aware that for the founders, the IPO is their exit, not their entrance. Co-founders often care less about the future of the company once it lists than they do about cashing out on their investment.

This is well known in the venture capitalists world where they would back a company until it seemed viable, then throw it onto the public market with the result that small investors get burned and the founders make an early profit.

The point being – buying shares in Snap with no voting right is dead money.

Snap Has No Real Profits

Riddle me this: How can a company that generates no profit (and may never do) be valued at more than $20 billion dollars? I’m starting to doubt if anyone actually read the offering.

Here are the facts: Listed revenue was $404.5 million in 2016, up by over 6x from $58 million a year earlier. On the surface this appears to be fantastic but if you look at operating expenses all is not well with an earned net loss of $514.6 million last year.

In Q1 of 2017, Snap had a net loss of $2.2 billion compared to $104.58 million net loss in Q1 2016. Granted that much of this net loss is due to stock-based compensation, with $750 million alone going to CEO Evan Spiegel. The operating expenses for the quarter were still extremely high at $196 million.

Simple logic concludes that Snap spent more money in research and other expenses during Q1 of 2017, probably looking for some way they might justify the company’s valuation to investors. You don’t have to be a certified accountant or even be in possession of a calculator to identify something fundamentally is wrong with these numbers.

As Douglas Rushkoff said in his fantastic book called “Throwing Rocks At The Google Bus: How Growth Became The Enemy Of Prosperity”

“…paper billionaires, [Are those] whose worth is measured in stocks, not profits. That’s because, for the most part, the Internet companies they run don’t really have profits – certainly not ones commensurate with their market capitalizations. They become success stories only on the day the founders and investors make their exit – that is, sell their stake for something more real, like another company or just plain money.” – Douglas Rushkoff

So How Do You Value Snap?

Most startups are yet to create any tangible profit and Snap is no different. Basic valuation models that focus on sales instead of earnings should be used.

Lets take a look at Snap using the price-to-sales ratio, which is the number of shares multiplied by the share price (a.k.a market capitalization) divided by total sales for the past 12 months.

Remember – The lower the ratio, the better the investment. A very high price-to-sales ratio should be a warning to investors.

Snap has the highest price-to-sales ratio of any major U.S. IPO 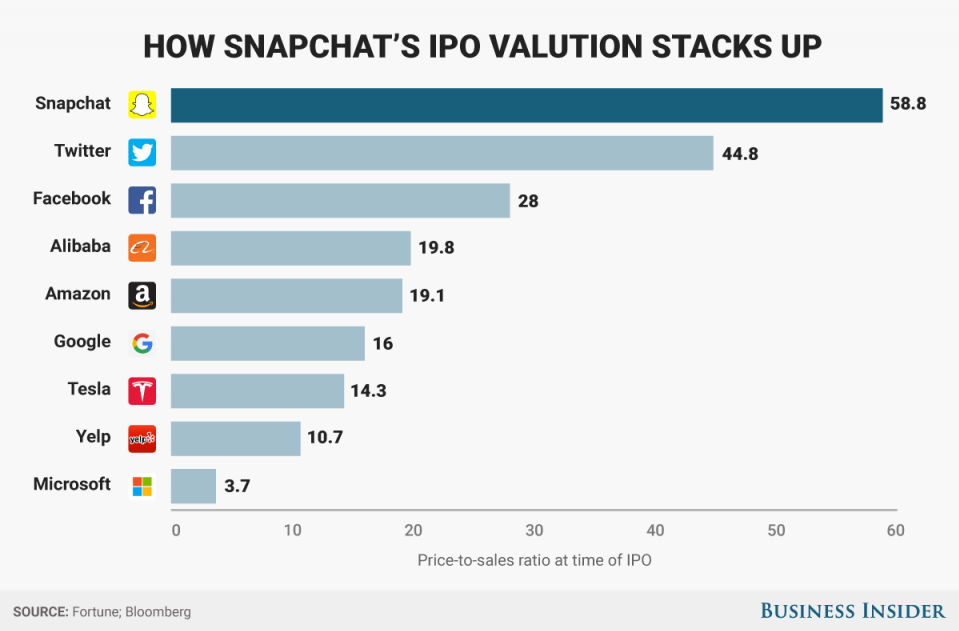 There is definitely a valuation issue here and to make matters worse, Snap is being heavily shorted as its “lock up” period expires which allows insiders to finally sell their shares. This could easily set off a panic selling frenzy.

Investors who think Snap is worth $20 billion are the same people who lost their shirts in the dot-com boom. Buyer beware.

How Does Snap Compare To Other IPO’s?

Comparing Snap to other tech IPO’s such as Facebook, Twitter and Google reveals even more bad news. Snap could well be the priciest tech IPO to hit the market in the history of tech stocks ever!

It’s 2x more expensive than Facebook’s IPO, and almost 4x as expensive as Google’s. Even Fortune took a look at some other notable IPOs of tech companies and couldn’t find a single one that offered shares at a higher valuation than Snap.

Remember: Twitter and Facebook both suffered big declines in stock prices in the short months after going public.

In March, Snap traded as high as $28 per share, but since then the company has lost more than a quarter of its value.

Another problem for Snap is the large stock grants to employees. In 2016 Snap had stock-based compensation expenses of around $1.7bn, or roughly $1.4m per employee. If this sounds exorbitant then you would be correct. Facebook’s average stock based compensation was around $230,000 and Google’s $144,000 per employee. 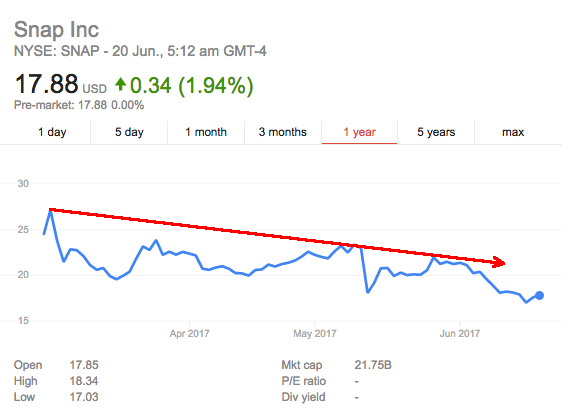 The worst thing that an investor can do is buy stocks without looking at underlying fundamentals. Tech IPO prices end up being unsupportable, at least in the short term.

Personally, I have serious doubts over Snap’s core products. Snapchat is witnessing troubling drops in user acquisitions. Let’s not forget that the majority of users are 18-34 years old and as noted in the filing:

Existing users may move off to another platform especially if it also offers disappearing messages as a feature and not an entire function. 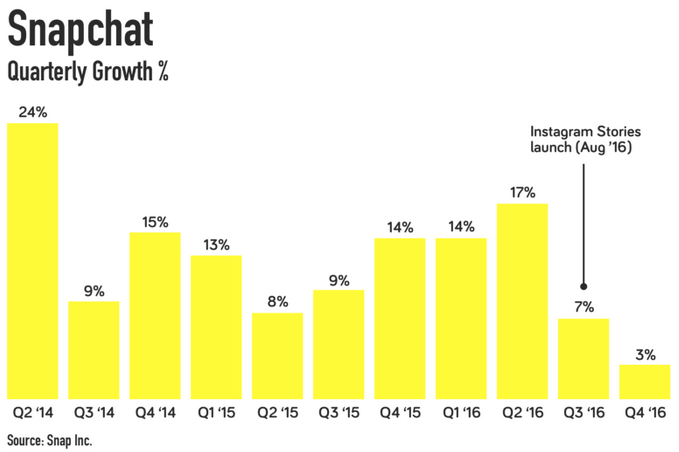 Snapchat also has no user history as its entire premise is built on the idea of temporary content. In contrast, Facebook has profiles and timelines to monetize.

Snapchat has started to allow advertising in between users’ stories and in articles on Discover, where publishers offer a range of disappearing articles and videos tailored to 18-34 year olds. Brands can also buy sponsored lenses that overlay on the app’s facial-recognition technology.

In the run-up to its IPO, Snapchat added Bitmoji which features cartoon characters for users to personalize and also began selling a set of “smart” glasses called Spectacles. It should be noted that of the $404.5 million in revenue Snap brought in last year, very little came from Spectacles.

Given all of these enhanced features, in addition to self-erasing photos, one would conclude that Snapchat user base are extremely happy with the app. Not so.

The average rating for this app in the Apple Store languishes around 2.5 – 3 stars and maintains a plethora of complaints ranging from laggy camera issues to heinous battery drain problems.

Lets not forget that in 2013, Facebook offered $3 billion to buy Snapchat.

Interestingly, when Snap announced the pricing of its IPO it quoted the overall offering size to be worth $3.4 billion Initial Pricing.

Both Facebook and Twitter are aiming for global reach yet Snapchat is presently focused on the smaller Western markets, whose users are more valuable to advertisers. There are questions to be asked over how large Snapchat’s user base can realistically become and if this can support the valuation of its stock.

I’m not saying that Snapchat isn’t successful; it’s just not going to be successful enough to justify all the money, hope, and expectations that investors are claiming it to have.

“It’s not enough for an app to support a sustainable business; it has to have a path to owning its entire market, presumably forever, with a means to take over still others.” p.188,189 – Douglas Rushkoff

Snapchat will never achieve the scale and reach of Facebook so it is a deception to value it as such. Meanwhile, they still need to keep an eye on their competition.

Companies can keep growing and expanding and doubling engagement but are they creating or producing any real value? Facebook brings in actual revenue at the same time it connects people worldwide. Twitter and Snapchat are harder to sell in this way especially through the vagaries of identifying what they actually produce.

In Snapchat’s case, disappearing messages aren’t an ideal environment for advertising. I can only conclude that Snapchat has lost its way in the glut of mass picture sending and shouldn’t expect to remain sustainable making revenue from selling ad slots.

I can’t see how Snapchat can earn the sort of ad revenues that Google and Facebook achieve.

Snapchat must evolve in order to survive instead of thoughtlessly using an advertising model that is a decade behind.

What Snap should do?

All things considered, if your still planning on investing in Snap then the lesson seems clear: Its just one giant waste of time. It’s actually called speculating, not investing.

Don’t be left holding the stock when the share price disappears.

All opinions expressed are my own and do not express the views or opinions of any employer.